We have so many different games coming to this year’s Scarefest that we decided we should do some semi-weekly highlights so that none of them get missed in our expansive schedule.  That would hurt their feelings, and no one wants that.  Every game should feel special.

So today’s Special Game is Bolt Action!  Running Saturday afternoon and night, you should sign up to check it out.  See our full schedule here, and get your ticket over here! 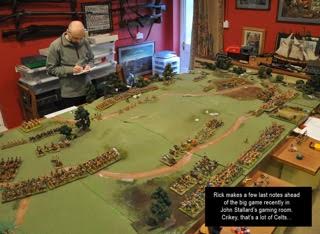 In a stunning display of men and machine, the armies advance; the barking of machine guns, the thunder of artillery, the rumble of armor. Bolt Action is about creating World War II combat on a tabletop using dice, model troops and tanks. Bolt Action is a “War Game”. Although it is just that— a game of war fought between armies of models— it is inspired by the real fighting men, the actual equipment, and personal accounts of those who played their part in the historical events portrayed. In a game of Bolt Action you can be expected to face the same sort of decisions and challenges as did the company commanders in action at the time. All you need to do is to pit your wits against the opposing commander as you enact just one small part of the greatest conflict in all of history— World War II.

May it be known that this is not to discuss the political ideals of the numerous nations that fought in this epic conflict. On the battlefield there is not “good and evil” there is just a soldier fighting for his country. So, Let us remember those who fought and died for their respective countries, the hardships, the struggle, and the heroes of the Greatest Generation. May their sacrifice be remembered, and may we honor the fallen, the veterans, and those who have yet to come home.