Continuing on with our quest to leave no game neglected (or at least unmentioned), today’s highlight is Call of Cthulhu: A Time to Harvest! 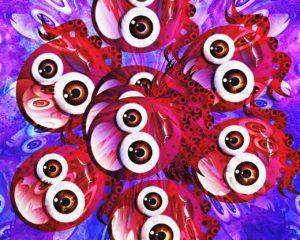 Call of Cthulhu is a horror RPG based on the writings of the late, great H.P. Lovecraft and his spawn.  Those he inspired/possessed.  Whatever.  Basically there are a whole lot of monsters freakier than your worst nightmares (we hope) and creepy cultists and the like who for some reason keep running toward them, rather than away.  The game is based on Chaosium’s Basic Roleplaying System, which they’ve expanded into a Call of Cthulhu organized play system, and is pretty much guaranteed to make your character lose their mind!

A Time to Harvest Plot summary:

In the summer of 1929, Miskatonic University’s Anthropology Department, under the leadership of Professor Roger Harrold and the Geology Department’s Professor Ashley Learmouth puts together groups of interdisciplinary students to explore the Vermont hill country in search of the origins of a long-held Native American legend, and to collect certain ore samples from the hillside. The first trip revealed a number onf interesting ore samples. One group found corroborating evidence of the native legend, and planned a second trip to the same location.

Tragically, on their second trip to Vermont, two students disappeared, while a third was found dead (the fourth, injured himself the night before the return trip and was unable to make the journey).

What happened to the students? What is this legend all about? Find out in A Time To Harvest.

This game is being GM’d by Chris Hamilton (of “I killed how many characters?” fame), and will run as a two part series beginning on Friday afternoon and finishing up Saturday night. As of this writing there are only three seats left…go sign up now!