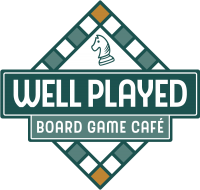 We, here at AVL Scarefest headquarters, are delighted to be able to announce that we have a new partner in this year’s endeavor: Well Played, North Carolina’s first board game café, will be hosting our board game area. What does this mean, you say?

Well, firstly, it means our poor, tired, overworked Minions will not be hanging around the board game section, giving out really bad advice. Last year, Minion #11 totally mixed up the rules for Betrayal at House on the Hill with Monopoly, which resulted in Father Rhinehardt trying to buy his way out of a cave-in to the basement with a “second place in a beauty pageant” card, while Missy Dubourde spent two hours with her right hand building hotels and insisting that the other players owed it rent. It was awkward.

But more importantly, along with being available to help you all figure out how to play any of the games in the extensive library, Well Played will also be running several board game tournaments and play-to-win sessions over the weekend! Exciting offerings include a King of Tokyo tournament on Friday night and a Resistance tournament on Saturday, as well as a selection of Play-to-Win games offered on Sunday. Basically, it will be awesome. Make sure you allot yourself some time to explore this wondrous new development!