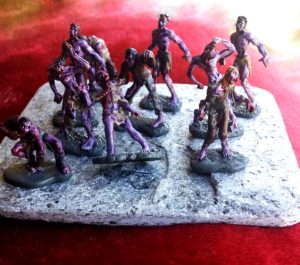 Because the truth of the matter is you can never have too many zombie minis.  It’s a simple fact of (un)nature: zombies spawn zombies.  And you can start your encounter thinking you will only be fighting 6 zombies, but we all know how that goes: Gumbo the fighter goes tearing in, swearing he can take the entire bunch of ’em alone…and then there are 7.  And then Darkpants the rogue swears sneak attack applies to zombies, and (after a 20 minute argument with the GM) then there are 8.  And so on…until the entire party except you are zombified, and you decide to take their loot and go buy a castle in the middle of the ocean, because there’s no helping those who won’t work with the group.  Until they’re dead, that is…then they suddenly seem frightfully teamwork-oriented.

This here is an adorable little slate just writhing with 10 miserable, rotting zombie minis.  A fabulous paint job by James Becker (yes, the same guy who made the shield..he’s a multitalented gentleman) gives just the right tinge to their decomposing flesh.  Sure to be a hit the next time you have to start replacing character minis with zombies!

Thanks again, James, for yet another awesome prize.